Here are some thoughts about biblical interpretation as I try to get clear about the reader’s role in the phenomenon of meaning.

The chapter that I am currently working on is about the way in which we create meaning as we read the Bible.  This is because the Bible (like any text) is, at the most basic level, marks on a page.  Readers interpret those marks as words bearing meaning.  But the act of gathering the meaning is not simply a matter of decoding signals, as an old model of communication suggested.

This model suggests a machine-like simplicity in the act of communication.  One brain encodes information in linguistic signs and expresses those signs in some form (speech, written words).  Another brain then perceives the signs and decodes them, extracting the meaning. 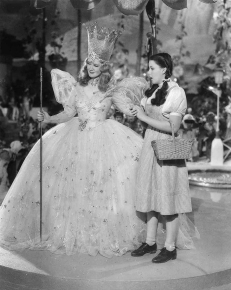 to get at something besides the semantic content of a text.  Think about interpretations of The Wizard of Oz.  Some have seen it (especially the book) as an allegory about the political movement, Populism.  In this view, the story is about the struggle of farmers (e.g., the scarecrow) against industrialists (the Wicked Witch).    The city of Oz represents Washington, D.C.  Dorothy’ journey there symbolizes the ultimately futile hope of farmers for help from government.

A different line of interpretation see the Wizard of Oz (especially the film) in psychoanalytic terms.  Dorothy represents the transition from adolescence to adulthood.  In a Jungian interpretation, the various characters in the film symbolize the various parts of Dorothy’s psyche that she must integrate into order to achieve full individuation.  The scarecrow represents rationality, the tin man emotions, Glinda (the good witch) Dorothy’s ideal self, and so on.

These sorts of interpretations are not really about discerning the meaning of events within the film (e.g., how Dorothy proposes to deal with Miss Gulch after she wakes up from her dream).  They are instead interested in grasping what I will call the film’s existential meaning–its message for the viewer.

The idea of existential meaning is that something can say more than what it seems to mean.  There is, for instance, the example of rhetorical questions.  When I was in high school, we thought it was hilariously funny to respond to questions having obvious answers with the rhetorical question, “Is the pope a Catholic?”  Rhetorical questions show us that the meaning of a sentence goes far beyond its grammatical form and semantic content.

The interpretations of The Wizard of Oz discussed above all assume that it communicates at two (perhaps more) levels: At the level of narrative, it is the simple story of an adventure, a journey.  As such, it is primarily an act of entertainment; it has no message for the audience, except perhaps homely bits of advice like “endure hardship” and “persevere in troubles.”

But at another level, The Wizard of Oz perhaps does contain a message or messages that bear on the audience’s existential situation.  Perhaps the book really was a satire about Populism cast in the form of a children’s story.  Perhaps it really does reflect the dynamics of the psyche, comparable to the way in which the original Star Wars films (episodes 4-6) reflect oedipal dynamics (the Luke Skywalker and his father theme).

Asking about the existential meaning of a film or text involves the viewer’s or reader’s situation.  We can ask political or psychoanalytic questions about The Wizard of Oz because of our cultural situation.  In our situation, those sorts of questions make sense. The text/film makes sense to us in those terms.  It is, in a word, meaningful.

This means that reading a text or seeing a film is more than just receiving information. We do receive information from the text or film, but we do so according to our cultural situation.  Our understanding of what the film/text is about is a process in which elements from the film/text are joined together by means of resources available in our culture.  Put differently, we inevitably understand things according to our situation.  Being embedded in our culture (really, cultures), we necessarily find the existential meaning of a film/text in its capacity to speak to us in our situation.

Here’s the point: The act of reading the Bible for its existential meaning (i.e., reading the Bible as the word of God) necessarily involves hearing it speak to us in our situation.  Historical study of the Bible helps us to a limited extent get out of our cultural situation and enter into the thought-world of ancient people.  This is necessary and important in order to appreciate the historical particularity of the Bible and to avoid manifestly bad interpretations.

But historical study cannot in itself yield the existential meaning of the Bible.  For this sort of meaning, we have to engage the biblical text, not in the somewhat artificial guise of the historian, but as beings rooted in a particular, contemporary culture.  Without this approach the Bible remains a historical artifact, like ancient coins and pottery.

Obviously, there is much more to be said on this subject.